All you need to know about Goldendoodles with straight hair

Many dog owners know that the hair of a Goldendoodle (a cross between a Golden Retriever and a Poodle) can be wavy or curly, but did you know that they can also have straight hair? When choosing your Goldendoodle, knowing whether it will have straight or curly hair can help you make an informed decision about what kind of fur care you might need to invest in as well as grooming habits you should develop when your puppy arrives at your home. While curly-haired Goldendoodles are much more popular, here is everything you need to know about flat coat goldendoodle.

What are golden doodles with straight hair?

As a first step, what exactly is a Smooth Coat Goldendoodle? Dogs that don’t have the curls or waves that give Goldendoodles their signature Goldendoodle appearance are known as Flat Coated Goldendoodles. The Goldendoodle with a flat coat can and typically does resemble his retriever progenitor, despite having a build more like that of his Poodle progenitors. These dogs are just flat coated retriever poodle mix which get a coating gene from the retriever parent. Therefore, why do certain Goldendoodles have a flat-coated surface?

Goldendoodles are the offspring of a Golden Retriever and a standard Poodle. Despite the fact that no two puppies from this unique crossbreed are similar, the offspring of this hybrid can inherit traits from both sides of the genetic pool. Even puppies from the very same generation might have drastically diverse appearances, depending on which parent’s genetics are dominant.

Consequently, some F1 Miniature Golden Doodles may have the wavy hair of their Poodle parent, while others may acquire the flat, smooth coat of their Golden Retriever parent.

For the purpose of this piece, we shall refer to the Golden Retriever coat trait as the “N” gene, while you may also sometimes see it alluded to as “I” or “IC” genotype, meaning incorrect coat, although the hair is not incorrect at all—this is the fur a Golden Retriever should have. 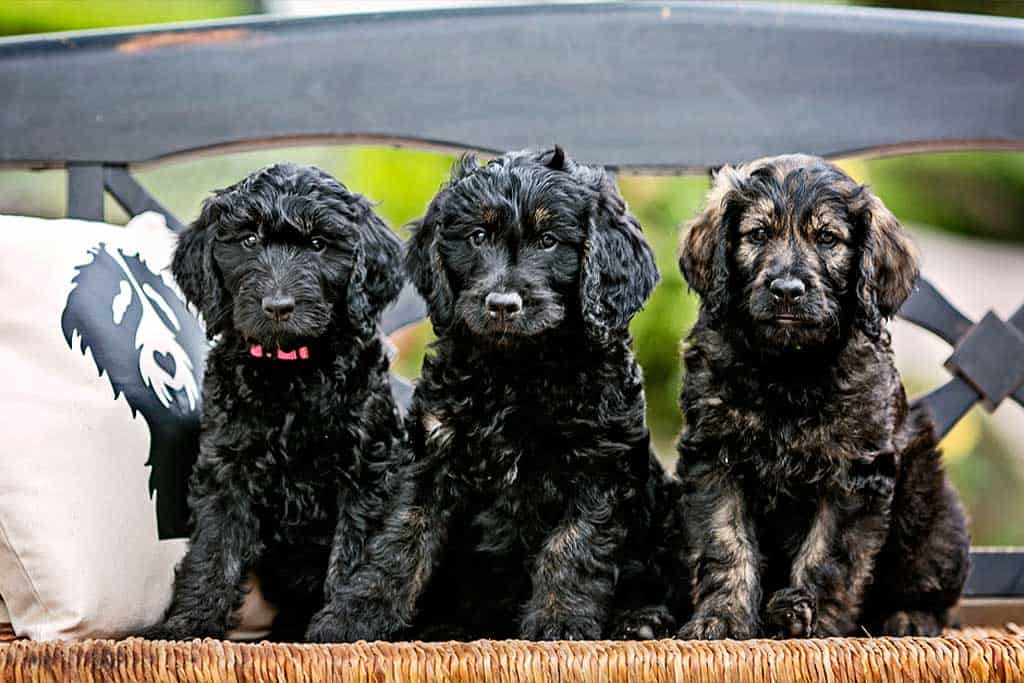 The ‘N’ gene is involved in the Golden Retriever’s flawless, beardless face and soft, falling coat. The Poodle possesses a hair gene called the “F” gene, where “F” stands for the frizzies they tend to have. Whenever a Golden Retriever is bred with a Doodle, culminating in F1 Goldendoodle offspring, each offspring will receive one fur gene coming from each parent carrying the gene, culminating in a hereditary coat type of F/N (single duplicate of each). This indicates that the dogs will still have Doodle-typical furnishings. When talking about F2 or second-cross Goldendoodles that have been around for a while, the situation gets more complicated.

Regarding coat genetics, breeding a standard golden doodle to some other goldendoodle is indeed a game of chance. Approximately half of the offspring in a litter should receive one ‘F’ and one ‘N’ gene from both parents, giving them the traditional Doodle appearance. The remaining offspring will get two ‘F’ genes, one from each parent, providing them with a Poodle-type coat. Others (about 25%) will get one “N” allele from each parent. This will give them a wide coat like a Retriever’s.

The generations of the mixed breed would also impact the fur style of each and every offspring resulting in some dogs becoming straight coat goldendoodles.

Poodle offspring resulting from purebred parents will have a Poodle genuine parent and a purebred Retriever parent. That implies that each parent should contribute one-half of the pups’ genetic composition. Therefore, an F1 Goldendoodle is comprised of equal parts poodle and golden retriever.

Generally, F1B Goldendoodle offspring are by far the most common variety since they have an adorable, lovable appearance that people absolutely love, and they also have a low-shedding coat. 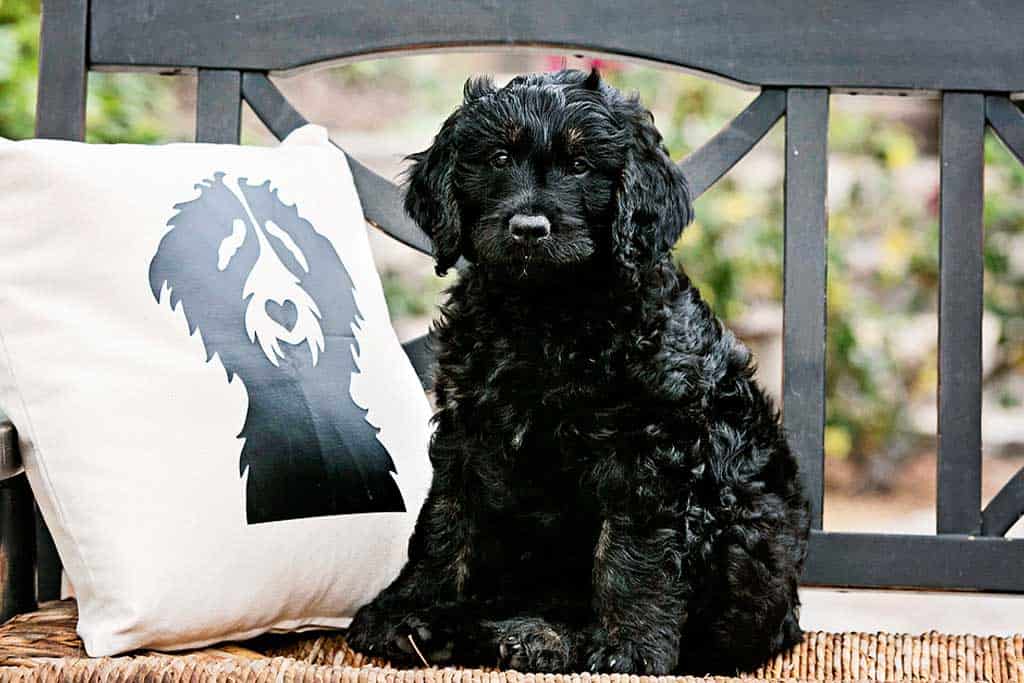 The fur of the Goldendoodle pup frequently varies as he develops. As a dog matures, its coat color may fade by becoming brighter, and its hair could become smoother or puffier. One of several enticing aspects of Goldendoodles is how you can never tell what you’ll wind up getting, a goldendoodle with straight hair or one with frizzly hair to match their poodle parent.

How to determine the type of hair a goldendoodle might have

As a puppy, it could be challenging to predict just what kind of fur a Goldendoodle will get as a full adult. Without including genetic screening, which reveals definitively what coat traits a puppy possesses, there are some identifying characteristics.

The fur on the snout of a puppy is often crimped or wavy, when the puppy will grow to have curled hair. If it doesn’t have this feature, then you might have a straight haired mini goldendoodle.  However, this characteristic does not typically appear till the puppy gets old enough to be as old as 4 weeks. Don’t really examine the fur on the puppy, since the majority of these offspring tend to have soft and often wavy fur. The moustache is decisive in determining if the offspring will have the furnishings associated with goldendoodles. Even fully equipped puppies have surprisingly smooth fur on their bodies compared with fully grown dogs, and it takes approximately twenty-four months or more to see the “complete look of the dog. There exist some incredibly curly, heavily-furred full grown straight hair goldendoodles that lack curls as puppies despite having obvious fur.

Numerous breeders medically analyze the male retreivers to see if they will generate straight, curly, or wavy offspring. The Cu loci genome, also called the KRT71 allele, influences the nature of fur in young dogs. The finer a dog’s fur is, the less Cu locus it has. Goldendoodles’ hair may contain a defective Cu locus trait or be curly because they were typically bred from golden retrievers and standard poodles over many generations. Your veterinarian can conduct a DNA test to evaluate the coat type of the puppy that you are purchasing. Tis is the surest way of knowing your pups’ coating traits. 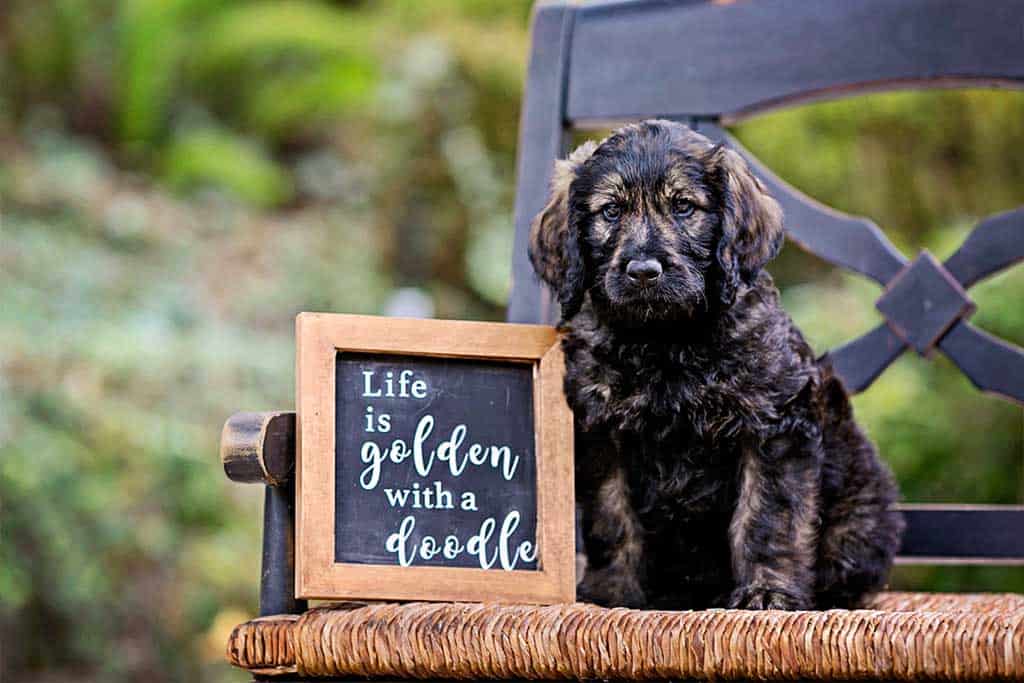 Preferably, you’ll want to go with an F1b Goldendoodle or one whose geneticist will conduct a genetic test on your behalf in order to ensure that your dog has the exact coat color and pattern that you’re looking for. Curls are another concern, as it is conceivable to see an unfurred but wavy puppy (seamless snout just like the golden Retriever parent but a curled coat on its body) or a furred Doodle with smooth fur.

Is there a greater risk of being allergic to a Goldendoodle with a flat coat?

Flat-coated retriever poodle mix mixtures are popular because they are allergy-free.

Doodles are more likely to produce an allergic reaction than flat coated golden doodles. Most sensitivities are caused by “dander,” the minute skin particles produced by every living bird and animal, or by spitting instead of hair alone. If you have allergies and want to adopt a dog, the only way to know if a straight-haired mini goldendoodle or another breed or mix is right for you is to spend time with it. A good breeder should require you to engage with their animals if you are sensitive or allergic before letting you purchase a puppy.

Which Goldendoodle generation has a straight coat?

Generally, (in relation to goldendoodle generations), F refers to filial, which indicates that the dog is just a combination of two dog species, # indicates the dog’s generations, and B signifies backward cross.

The advantages of owning a Goldendoodle with straight hair 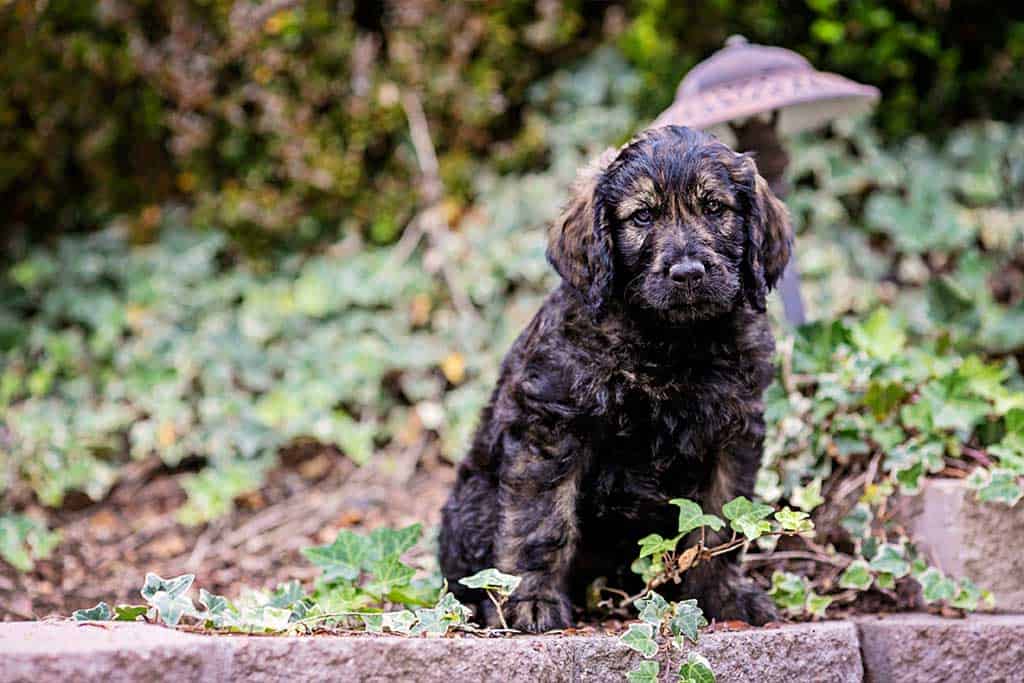 1.  Cheaper in comparison to the wavy/curly-haired Goldendoodle

Most producers only attempt to produce dogs with curly coats. Certain coat varieties are by far the more popular and thus are recognized for their allergenic characteristics. As a result, when producers breed puppies with flat coats by mistake, the puppies are more difficult to sell.Because they are difficult to sell, breeders typically list them for much less than a thousand dollars. Once it has been determined that a breeding couple only produces dogs with straight fur, they are generally not bred again.

2.  It appears to be a golden retriever

Having a Goldendoodle has numerous benefits apart from their attitude alone. However, having a straight-haired goldendoodle might also be advantageous because, most often than not, they are built like golden retrievers.

It is also a matter of individual choice. Some individuals do not find curly or wavy Goldendoodles as adorable as those with flat coats. You can therefore have a Goldendoodle with a coat that better suits your preferences.

Flat-coated goldendoodles are also less expensive since they require less grooming and this drastically cuts down the money for maintenance. They still require grooming and bathing to maintain cleanliness and prevent excessive flaking. However, because straight hair falls naturally, it does not require a haircut every six to eight weeks like wavy hair does. Depending on the specific grooming prices, this could save you between $400 and $550 every year. This also helps to save the effort and trouble of transporting your puppy to the barber so frequently.

Goldendoodles with straight hair shed much more than those with curly or wavy hair. That’s because straighter coats have fewer Poodle genes, which results in a flatter coat on the dog. If you adopt or buy a falat-coated golden retriever, you should prepare yourself for regular cleaning of the fur from the ground. However, flat-coated goldendoodle shedding is relatively lower than their Golden Retriever parents.

2.  They are not hypoallergenic 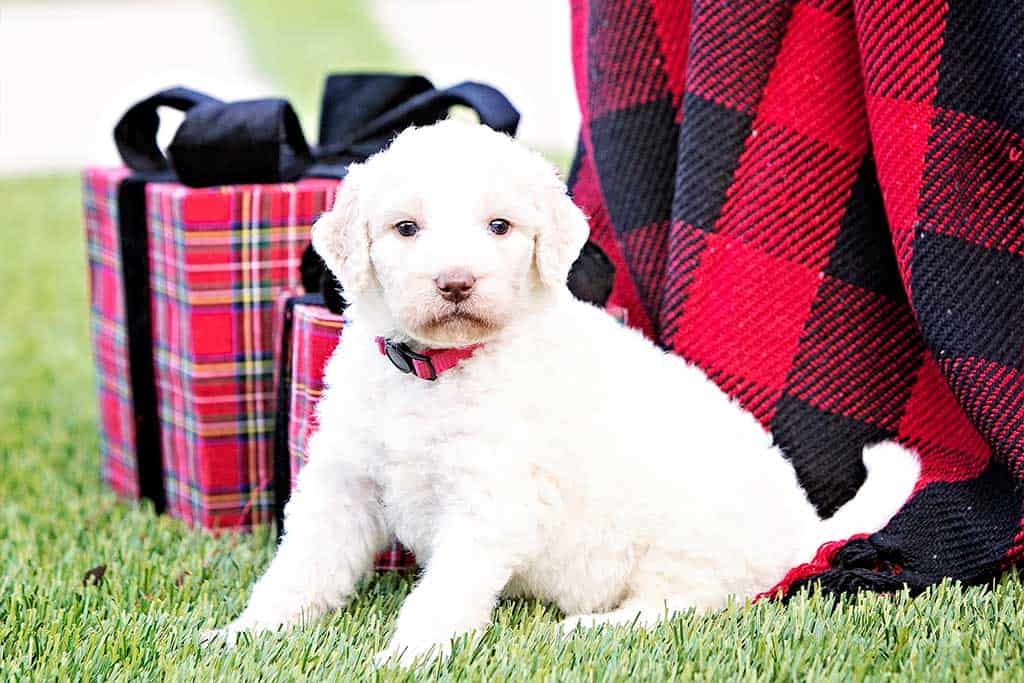 Overall, the Goldendoodle with straight hair is a hypoallergenic and low-shedding breed that is perfect for those with allergies or who don’t want dog hair all over their house. They are also intelligent and easily trained, making them a great family pet. If you’re thinking about getting a Goldendoodle, be sure to do your research to find a reputable breeder. And most importantly, have fun with your new furry friend.

1.  Can a Goldendoodle have straight hair?

Yes, and although they are more common than people think, they tend to be mistaken for golden retrievers because they are mostly built like them.

2.  Why Does My Goldendoodle Have Straight Hair?

It is all a matter of simple genetics, with the golden retriever gene for fur being more dominant than the poodle gene, resulting in a flat-coated poodle.

3.  Do Goldendoodles with straight hair shed?

Yes. Because they inherit the gene from the retriever, they also inherit the shedding that comes with the flat coat.

4.  Which Goldendoodle Generation is the Best?

The F1 generation is the best and most popular because of its appearance and its temperament.

5.  Do Goldendoodles Lose Their Puppy Coat?

Yes, all golden doodles have a coat that will change as they mature, and eventually they will grow a permanent fur coat that will either be curly, wavy, or flat and straight.